“Eat your veggies”, our moms always said, placing a plate full of carrots and salad in front of us. But who knew that many years later, eating vegetables would be as tasty as eating your favourite fast food item?

Plant-based diets have become extremely popular in the last few years. As the world’s meat and fish resources are depleting, food scientists have been working to create foods that we love, without harming the planet. Whether it’s a juicy burger, a crispy nugget or even sushi, plant-based food producers have been cooking up our favourite dishes and changing the way people get their daily dose of protein.

The definition of plant-based food sounds something like this:

At Upsiide, we decided to run a study with plant-based food eaters in the USA and Canada, to track which plant-based protein brands people like the most. We also dig into these communities’ motivations and perceptions of plant-based food more generally.

To make things easy, we focused on two of the most popular plant-based fast food categories - burgers and nuggets. In the study, which was answered by a group of 1200 people from Canada and the US, we had people tell us which brands they like the most, why they like them, and how they consume plant-based food.

The results surprised us. After crunching the data, we can now see which packaging designs and on-pack claims align best with consumers. We can predict which brands have cut through in-market, and which brands have more work to do. And we can tell you how different subgroups perceive the benefits of plant-based protein.

Before we begin, let's quickly run through the different scores on the Upsiide platform.

The Interest Score is the proportion of people who liked an idea and is expressed as a percentage. When respondents like two ideas, they are asked to trade-off between them, picking a favourite - which generates the Commitment Score (often referred to as Initial Commitment). Finally, the Idea Score is based on a combination of the Interest Score and the Commitment Score - it's an absolute score that's been calibrated to predict performance in-market.

So, what did we discover?

1. Some brands win, some brands lose and some you should look out for

The quadrant charts below categorizes the burger and nuggets brands into four brackets, according to the balance between their ‘total Interest’ - how many people swiped right - and their Commitment Score - how often they chose a specific brand when pitted against another brand that they liked.

In the nuggets space, we see hefty competition. MorningStar Farms and Beyond Chicken stand at the top right corner, indicating that they have a pretty high intuitive interest and initial commitment scores. In contrast, Nuggs is in the bottom left quadrant - this means that the brand or the product didn’t resonate well with the audience. 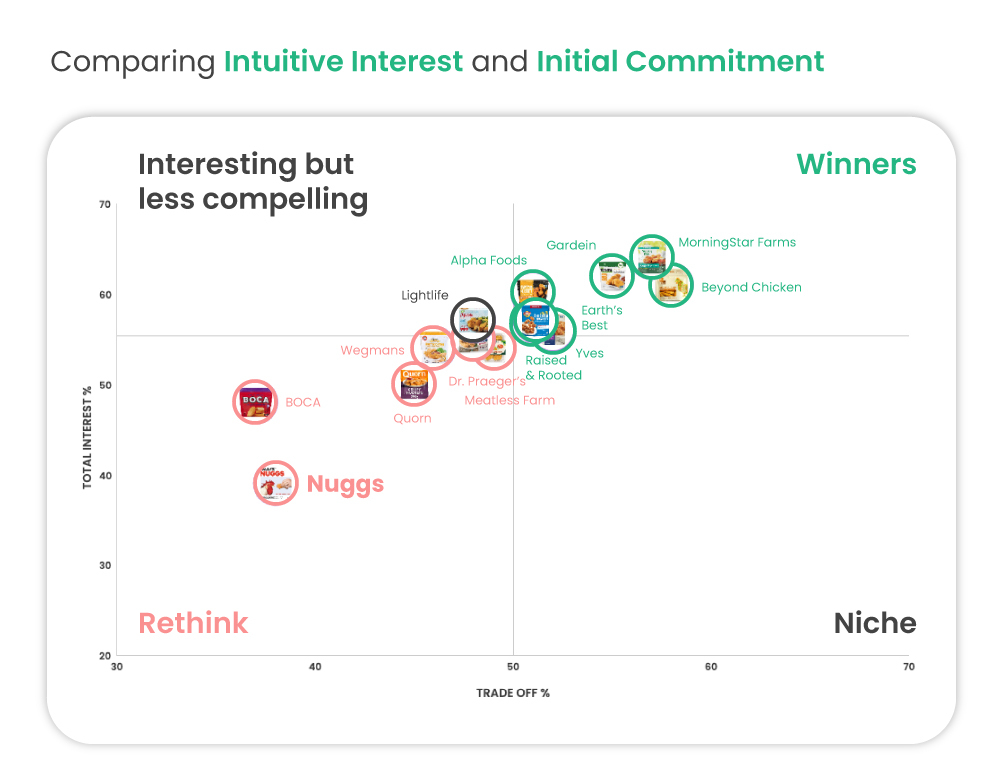 When we move to the burgers section, we see new points of interest, with many of the brands faring very well. MorningStar Farms, Pure Farmland, Amy’s Kitchen, Impossible Foods, and Gardein perform very well.

We were curious to see how different demographic groups reacted to plant-based protein brands and if age affected people’s choices in any way. Turns out it did!

Having divided the respondents into two groups, 18-49 year olds and 50-95 year olds, we saw that MorningStar Farms was the most popular option across both groups. But things change when we analyze the burgers and nuggets spaces by subgroups.

There are many factors to consider when it comes to Alpha Foods’ and The Very Good Butchers’ results; our educated guess is that the younger generation was attracted to the brands’ bold language and unique design.

Alpha Foods’ packaging uses differentiated, punchy phrases to describe the product benefits like “protein packed” and “unrivalled taste”. The copy is assuring and energetic. They convey a brand that is confident, daring to claim that their nuggets taste better - something that younger people might find appealing.

Similarly, The Very Good Butchers focus their messaging around the tasting experience as opposed to the health benefits other brands prioritize. The brand uses claims like “Delicious”, “Goodness”, and “Wholesome” ensuring that you think of a burger that can be as appetizing as the classic beef alternative. The slightly “hipster” design makes the packaging look artisanal and unique, as if it came from an independent butcher shop.

50+ year olds look for functional benefits in messaging and packaging

What unites those two brands is that they highlight primarily the functional benefits of the products. “GMO & Antibiotic free”, “organic”, “dairy-free” are some of the things that the older generations find appealing - these claims relate directly to their health. The insight a plant-based brand might take from this is, if you want to target those aged 50+, make sure your on-pack messages speak to the health benefits and healthy ingredients included in the product .

You might expect that since older generations were more interested in health-related claims, they’re likely to eat plant-based food because of their health benefits. However, the data we gathered further contextualizes that story. 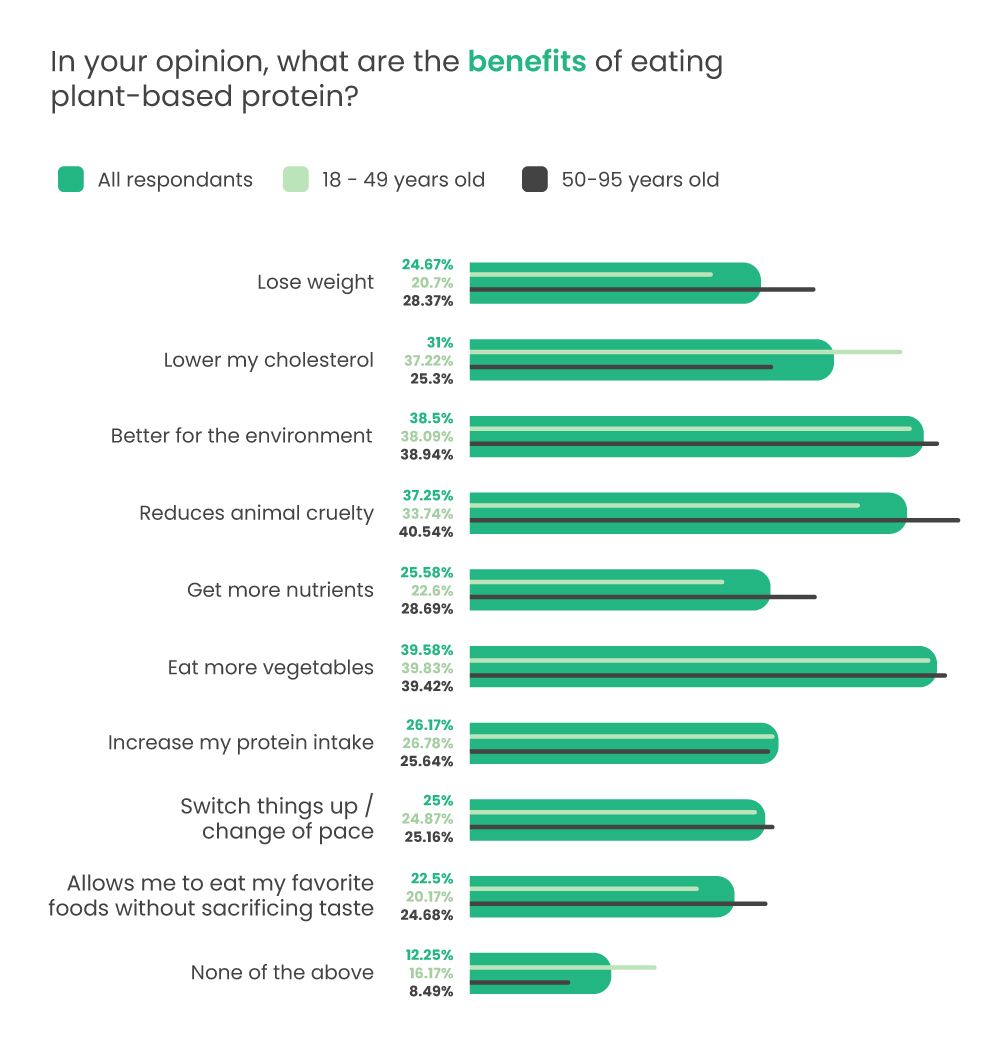 We surveyed consumers to check what they think when they see the word ‘plant-based’ on packaging. And the results were pretty widespread, with 27% stating that plant-based food is “made of plant products, does not include any meat (like red meat, poultry or fish) but may include other animal products like eggs”. 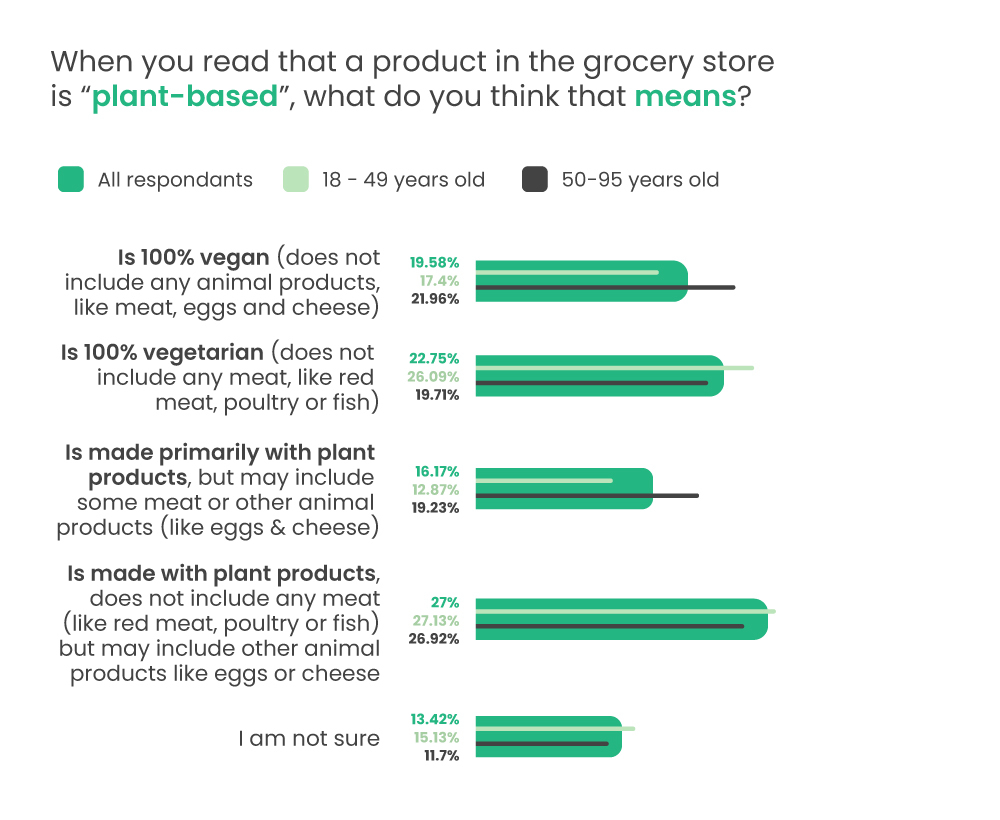 To clarify, when we talk about ‘plant-based’ in food, it essentially means that it’s made with plant products, doesn’t include any meat, but may include other animal products like eggs or cheese. The difference between the plant-based diet and vegan diet is that the latter is more of a philosophy or a lifestyle. A vegan person is against the usage of animals for food, clothing, goods or any other purpose (e.g. having animals perform in circuses or live in zoos). In contrast, a plant-based diet is primarily focused on food. It’s also worth noting that compared to veganism, the plant-based diet is a little more forgiving and still allows you to eat some meat.

This could mean that the general population has not yet fully adopted the term “plant-based” and needs brands to guide them as they navigate through the space.

If we leave you with one takeaway, it should be that plant-based foods are only going to become more mainstream. 25% of respondents noted that a plant-based diet helps them “switch things up”, which correlates with the perceived trend of eating plant-based food a few times a month. Even if someone hasn’t gone fully plant-based, they’re open and willing to dabble - initiatives like Meatless Mondays and National Vegetarian Week are proof of that.

Our comprehensive analysis of this study goes deeper than we have today, assessing the competitive landscape and a few choice brands’ performance against core success metrics. Check out the full study for free below.