The Competitive Landscape of the Plant-Based Protein Category

What makes a burger a burger? You might say it’s the juiciness of the patty, or the texture of the meat, or the perfect assortment of toppings and melted cheese on top. But would you still call a burger a burger if you got all those attributes in a patty made of plants?

Over the last few years, plant-based protein companies have been on a mission to make plants taste like meat. In 2016, Impossible Foods launched a meatless burger that can “bleed”, whereas Ocean Hugger Foods introduced us to alternative solutions to tuna such as Ahi tuna made from tomatoes.

And when we look at the category of plant-based protein now, the competition is fierce. In a category where creativity and technology merged to develop sustainable meat solutions, brands have been racing to deliver unique plant-based protein that can compete with well-loved meat-based alternatives.

To understand brand affinity and trends in the plant-based protein market, we decided to let consumers have their say. In a nationally representative group of 600 Canadian and 600 US shoppers, we’ve got the scoop on 14 plant-based nuggets brands and 19 plant-based burger brands. As well as getting them to choose which brands appeal to them, the survey was also designed to track their consumption of plant-based protein and their motivations to try it.

The data that came back was comprehensive, mainly because we got to unpack some exciting insights thanks to Upsiide’s new Idea Split feature. Idea Split allowed us to assess specific brands against real business metrics and discover which products raised people’s appetite and which ones, well, didn’t.

An overview of the competitive landscape

Insight: The plant-based nuggets and burgers brand associations can be divided into three categories

When we look at the plant-based nuggets market, the space is overflowing with brands ranging from global brands (like Beyond Meat and MorningStar Farms) to newcomers (like Quorn and Yves).

But if we dive further into the results, we see certain patterns in how these brands are connected. Those patterns helped us divide the plant-based nuggets landscape into 3 groups based on the packaging design and on-pack messaging. The groups are:

The plant-based burgers space has a similar market set-up. The three groups we’ve identified include:

So what does this mean for nuggets and burger brands?

If you want to launch a new plant-based protein brand, or rethink your current brand’s packaging and messaging, you’ll need to bear in mind the underlying systems at work in these spaces. That being said,  if a brand chooses to disrupt these markets or steal share from other territories, they might be able to differentiate themselves and attract the attention of a niche audience group.

Insight: Packaging design affects the perceived value of a product

We first assessed the plant-based nugget brands’ packaging based on the appeal. Gardein, which was in the Natural category, was voted as the most appealing packaging. In contrast, the brands that were in the Childish territory, BOCA and Nuggs, weren’t as popular with the consumers.

But why did this happen? It appears that packaging design really matters and here’s why. 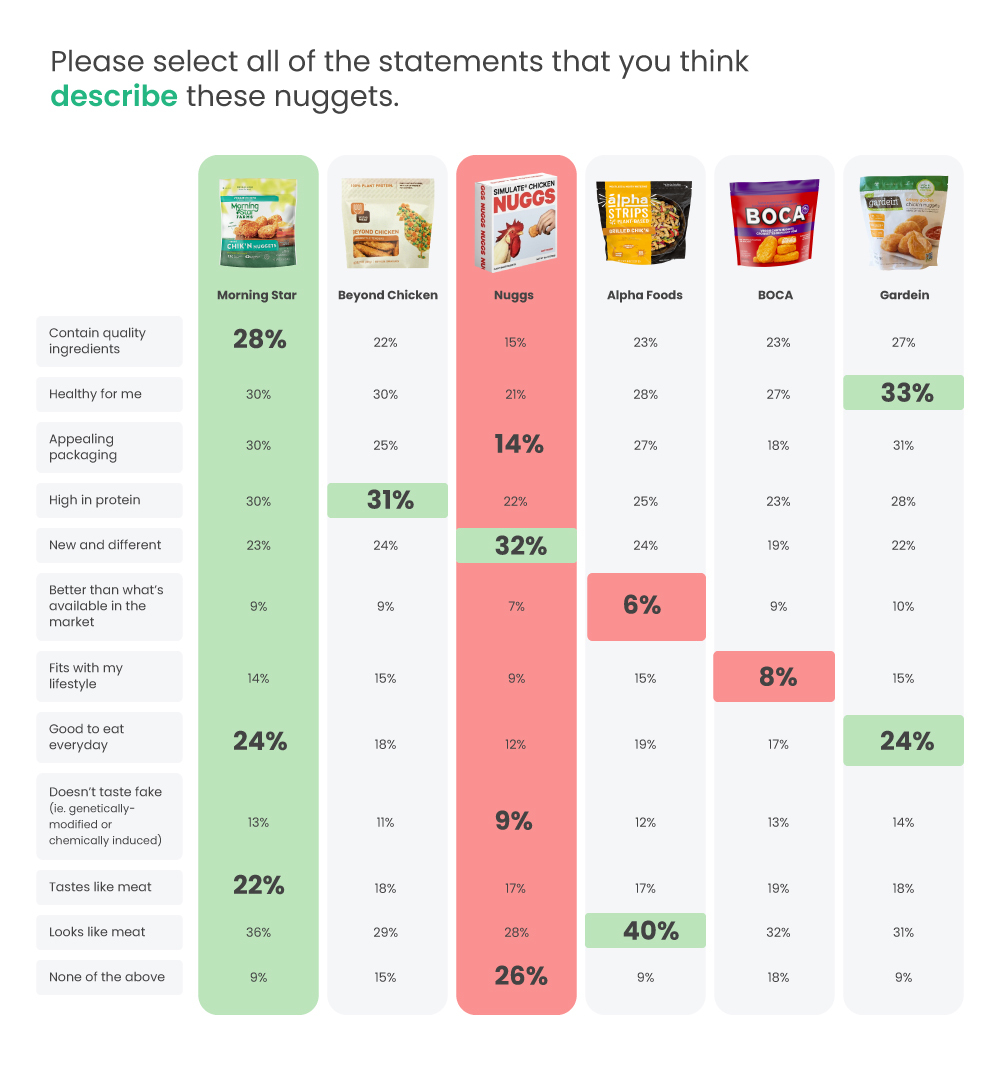 When we asked shoppers what characteristics they associate with each brand, those with a more “green and natural” packaging design performed best in terms of appeal - Gardein and MorningStar Farms gained over 30% of votes.

Curiously, those brands also became associated with characteristics related to health and high quality. MorningStar Farms performed best against the “contain quality ingredients” attribute (28%), whereas Gardein was considered the “healthiest” (33%). The sentiments for these two brands was predominantly positive, with many respondents mentioning that they “love the packaging” and that the nuggets “look healthy”, “delish” and, what many meat-eaters might appreciate, “looks and tastes like chicken”.

In contrast, Nuggs didn’t impress respondents as much. 46% of them voted that the packaging wasn’t appealing and 26% didn’t apply any of the attributes, picking the “None of the above” option.

Just as in the case of MorningStar Farms and Gardein, packaging design affected the way people perceived the quality and taste of the Nuggs nuggets - 9% stated that they taste most fake. 45% of the sentiment is negative - some users weren’t satisfied with the word “Simulate” on the package, whereas others were confused about the image of a rooster:

It’s evident that packaging plays a huge role in building brand perception, especially when it’s a product that not many people are familiar with.

Despite the negativity, there was one aspect in which Nuggs performed the best - uniqueness. 32% stated that the brand looks the most “new and different” compared to other plant-based nuggets brands, which means that perhaps an unconventional packaging design is a viable route to consider if you want to impress your audience. However, Nuggs’ case also proves that creative packaging should be balanced with appropriately ‘natural’ messaging.

Moving on to the Idea Split results in the burger sector, we see that Gardein also came out on top, becoming the most appealing packaging among the competition (54%). Beyond Meat and Impossible Burgers came last (30%).

However, the results aren’t as clear cut when we dive deeper into the data. In fact, it appears that shoppers react to every little detail when they look at the packaging - which makes it even harder for those brands to win consumers’ hearts and wallets. 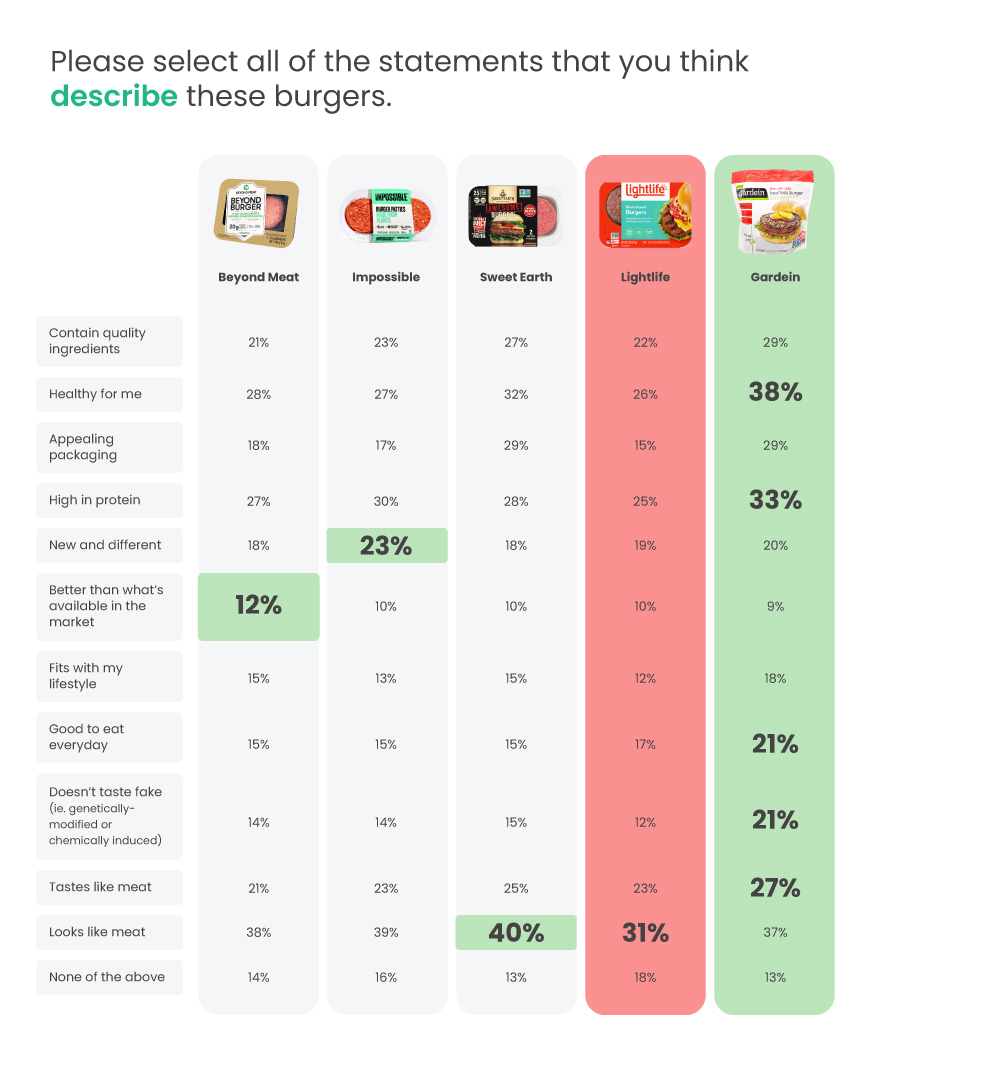 Just like in the case of nuggets, the visual appeal of the packaging correlated with assumptions about the product. Gardein was associated with healthy ingredients (38%) and the most meat-like taste (27%). This is likely because the packaging featured nutritional values like calorie count and the amount of protein.

Lightlife, however, didn’t perform as well, perhaps because almost 50 percent rated the packaging as “neither appealing nor unappealing” (46%). Despite the fact that the package displays a cooked burger and mentions the health benefits just like Gardein, people thought that it didn’t resemble meat as much as other brands (31%) and they also didn’t consider it healthy (26%).

When we look at the sentiment, we uncovered some of the reasons why the packaging didn’t resonate with consumers’ preferences. “The brand name Lightlife makes me think of nightlife and brings to mind greasy images of burgers” was one of the comments. “The packaging isn't very flattering and the photo of the burger and the actual burger look more like a prop.” said another reviewer.

While these comments are pretty subjective, they still reveal an important insight - that consumers notice the little things when selecting plant protein. They look at every detail, building associations with the brands in their minds.

Insight: Our TURF Analysis and Share modelling reveals which brands are likely to succeed in-market

To identify which plant-based brands have the potential to grow category penetration or to achieve significant market share, we modelled Share of Choice and TURF (Total Unduplicated Reach and Frequency). Wondering what those are? We’ll explain with an example.

Let’s imagine a food retailer wants to sell plant-based nuggets. How do they know which brands they should sell? Share of choice modelling forecasts if all of the plant-based nuggets brands were equally available and equally promoted through advertising and discounting what share each would achieve. TURF tells us the percentage of customers that a product can potentially reach and identify the combination of products that reaches the most customers. In combination, these two models can help a retailer to identify an optimal brand mix.

But what if a retailer wants to sell a variety of plant-based nuggets brands?

TURF Analysis tells us which brands can, in combination, maximize category penetration. If the retailer sells only Gardein, they can potentially reach 39% of shoppers. But if they sell both Gardein and MorningStar Farms, they can now reach 46% of consumers. The percentage of customers reached increases as we add more brands, until the results slowly plateau.

And the combination of brands isn’t limited to the above line-up. TURF modeling reveals 10 different product mixes that have the potential to reach a similar percentage of people. The data reveals that three brands appear in all 10 combinations - MorningStar Farms, Beyond Chicken and Alpha Foods. Gardein and Earth’s Best appear in 9 combinations. These brands will be the core of any successful plant-based nugget section.

In the burger space, the share modelling results showed 5 brands that have the most potential - Pure Farmland, Yves, MorningStar Farms, Sweet Earth and Gardein - each holding 7% of market share.

Digging deeper into the results, it’s also worth mentioning that The Very Good Butchers, which had one of the highest Commitment Scores in the category (58%), shows some promise. While it reaches only 16% of customers individually, it is included in all 10 of the top-ten brand mixes. This is because The Very Good Butchers has the potential to reach a unique consumer and expand total category penetration. It also performs relatively well from a Share of Choice perspective, with 5% projected share.

There is even more to discover within the results. But don’t take our word for it - check out our study to see what other insights we uncovered about plant-based protein.